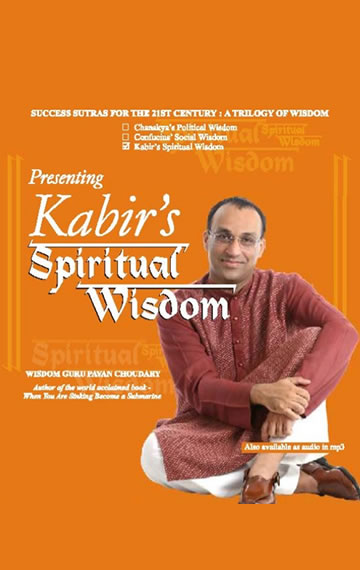 Kabir’s Spiritual Wisdom Saint Kabir has been one of the most unique Indian poet – thinker. Achieving a peak in spiritual consciousness, Kabir was not just a spiritual guru. Kabir’s dohas or couplets have been widely translated and attempts to interpret them have also been made. However, most of this interpretation is esoteric and academic. It often does not do justice to this great master of his times. The following pages truly highlight the essence of Kabir, not as a poet or spiritualist alone, but as a Success Guru. Wisdom Educator Pavan Choudary, in this inimitable compilation, is making Kabir address issues – of mentoring, love, friendship, humility, courage, desire, success, greed, speech, wisdom and many more – that present themselves before us. One often wonders if Kabir knew of the dilemmas of the 21st century or have the predicaments of life been the same always.