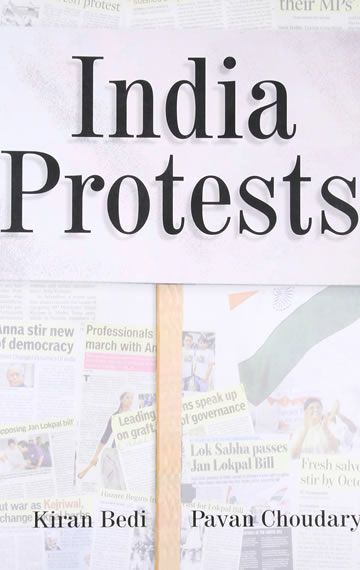 India Protests is an assembled chronicle of the civil-society supported anti-corruption movement in India, 2010-2013, also referred to as India’s Arab Spring or its second war of independence (against corruption). It gives a thumb-nail view of this historical awakening and will be a quick and easy reference for the readers to form their views, directly reading voices that spoke as the movement developed.

Kiran Bedi is the first and was the highest ranked woman in the officer ranks of the Indian Police Service. She is a recipient of the prestigious Ramon Magsaysay Award, Asian equivalent of Nobel Prize, for revolutionary reforms in police and prisons. Kiran has been voted as the most trusted and admired woman of the country. Her two NGOs, Navjyoti and India Vision Foundation reach out to thousands daily in education and self reliance. She is an author of several books, anchors TV shows, and travels widely on speaking engagements. For more, Dr Bedi is on twitter @thekiranbedi or www.kiranbedi.com

Pavan Choudary is the author of books like How a Good Person can Really Win, Broom & Groom (co-author Kiran Bedi), Lal Bahadur Shastri: Lessons in Leadership (co-author Anil Shastri), When you are Sinking become a Submarine, Machiavelli for Moral People and The Rx Factor. Pavan is also the Managing Director of Vygon, a French Multinational, hosts the TV program Hum Aisey Kyun Hain on Doordarshan, and has written columns for The Times of India and Financial Chronicle. He sits on some of the most respected advisory boards of India and is a sought after Management Strategist. For more visit www.pavanchoudary.in and twitter @authorpavan