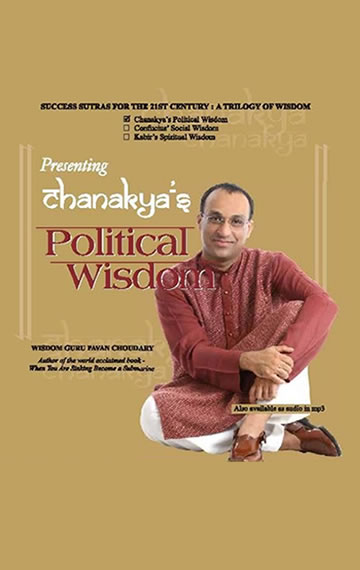 Chanakya’s Political Wisdom It is indeed the best time to showcase the work of the Indian Machiavelli – Chanakya – for both the Indian and the Western world. Chanakya’s Political Wisdom is particularly relevant because in the India of today, the circumstances are very similar to what they were when Chanakya was born – the country is under attack, not only externally, from extremism, aggressive neighbours and rivals in trade pursuing and pushing their agenda, but it is also under strain internally, because of its hypocrisy, factionalism, poor governance, civic norms and creaking infrastructure. At such a time, what Chanakya has said 2500 years ago, becomes relevant again. His thoughts are as valid for a common man as for a king.

Chanakya has been translated, but we found that despite the fact that Chanakya has been, by far, the best intellect the world over in Statecraft, with masterly skills in planning and diplomacy, there is no political commentary on Chanakya. Therefore, WVPD decided to showcase Wisdom Educator Pavan Choudary (referred as the “New Age Chanakya” by Indus Age, Australia), one the foremost political commentators in the world today presenting a true political commentary on Chanakya which will strike a cord in the mind of the politician as well as the statesman.